For decades, tens of thousands of people have enjoyed staying at Hi-Tide Resort on Moclips Beach on the Coast of Washington State.

They come from everywhere around the Northwest, from across the United States, and even from foreign countries.

Visitors love the clean, crisp air, the natural dunes, the river that wraps around the property, and walking the beach for mile after mile.

Families return year after year, settling into their favorite condo where they can watch the sunset, cook on the resort grills, play horseshoes, jump in the surf, and even cast a line to catch perch and other delicacies.

Little do people know that millions of other visitors seem to find the destination just as intriguing. They are native to the area and seem to be flourishing because, well, they are frisky, shall we say.

If you have never eaten one, know this - Razor clams are an eating delicacy that grows only in certain places in the world, and they are especially prolific there.

Razors live in intertidal and subtidal zones and are filter feeders with short siphons, so they live just beneath the surface to feed, like right here, just below the surface of Moclips Beach.

When low tides expose the bottom, the clams dig and burrow deeper into the sand with their strong muscular feet.

The clams are plentiful because females have 6-10 million eggs, of which less than 5% will survive. When ocean temperature reaches 55+ degrees, the clams release their sperm and eggs into the water.

Larvae that develop from the eggs are free-floating and called "veligers," carried by the current.

Over the course of 5-16 weeks (depending on water temperature), they develop a shell and settle to the seafloor as juveniles, but of those, 95% die of natural causes.

Razor Clams that survive burrow deeper and become harvestable when they reach 3.5 inches in one year and 4.5 inches in two. They can then begin to reproduce.

On Long Beach alone, diggers went home with 428,861 clams. That means that together, over one million of our favorite bi-vales went home with visitors to be fried, canned, dumped into chowder, or made into sushi.

But don’t worry about diminishing the population. Razor clams propagate at an astonishing rate.

Shellfish harvest licenses are required in order to dig clams. These are available at any sporting goods store.

Law requires that clammers keep the first clams they dig (no putting back small clams). In most years, the limit is 15 clams, but through the end of 2021, it was increased to 20 when recent surveys who healthy populations.

Razor clams are very fragile and easily broken: each year thousands of clams are wasted when diggers return small or damaged clams to the sand.

The next time you are sitting on our condo deck at Hi-Tide Resort gazing out over the sand and sea, think of those millions of razor clams enjoying the ocean just as much as you are.

T'was he Night Before 4th of July

It is late night July 3rd and all through the area, not a creature is stirring. Every pillow at Hi-Tide Resort has a head on it.

Children do not have visions of sugar plums dancing in their heads. They are dreaming of the shells they collected, the waves they jumped and the games they played today.

At dinner, every picnic table was filled with families devouring hamburgers and hot dogs hot from the barbecue, dollops of potato salad, and later followed by ‘s'mores stuffed with chocolate and mashed melted marsh mellows.

For moms and dads, grandparents and friends, beer was preferred. For some, it was fine wine. Cocktails for others. Children gulped fresh-squeezed lemonade as their libation of choice.

Kids and adults alike stayed up late ‘round the campfire spinning yarns and trying jokes. Campfire songs were sung, although no one knew all the words laughter erupted for no good reason. Smiles were everywhere.

Now it is late and every person here is dreaming of another dreamy day on Moclips Beach, or wading through the Moclips River, or playing horseshoes or just strolling through the dunes.

We can’t claim that jolly old Saint Nicholas will soon be here, but maybe Robert Gray, the namesake for our area, will appear for just a moment to proclaim "And to all a good night."

All Travel is a Local Beehive 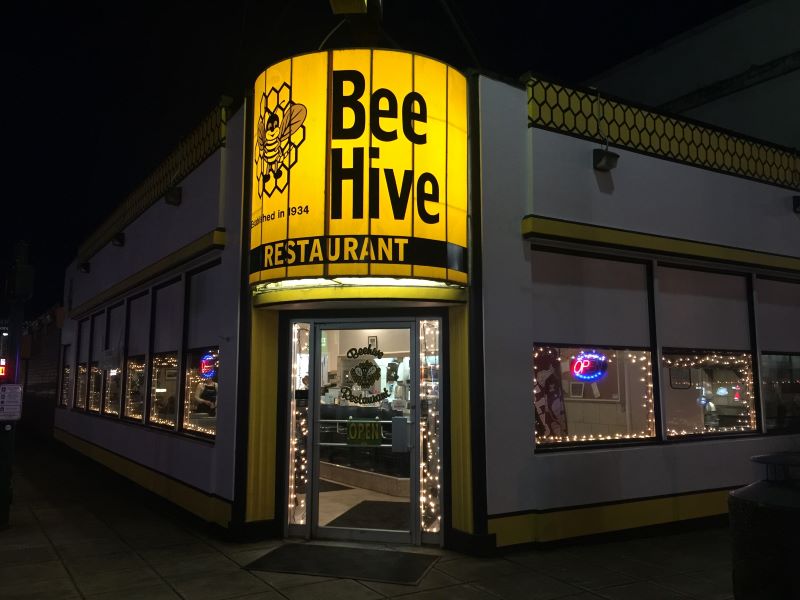 My memory is vivid even though it was decades ago. At age 10, I began playing little league baseball in the small town of Montesano, Washington State.

It is an idyllic place even today. The county seat and classically designed courthouse give the town the feel of financial stability. Homes and lawns are well kept and right in the middle of the town is the Nelson Baseball Field.

I dropped by yesterday during a time warp to find that nothing hand changed. The grass was green and well manicured. Local merchants had signs on the outfield fence. In the early morning, the only things missing were players, coaches and parents. I was all alone.

Winding up the road, I came to Lake Sylvia State Park and the time warp opened again. Nothing had changed in all that time. It wasn't fishing season, but I could imagine children on the bridge pulling in freshly planted trout. The beach and swimming area matched my memory precisely.

When we won little league games, the coach - my father, treated us to milk shakes at Gene's Stop and Go. They had dozens of flavors, but I never waivered. Chocolate was my one and only love. Still is.

At season end, Dad treated the family to dinner at the the Beehive Restaurant, that sat squarely in the middle of town. I remember the bright yellow sign with bees on it, the lunch counter, the waitresses so nice to small children, and the chicken-fried steak that my father ordered every time.

There are many stupendous things to see and places to go in the world. But those most loved are those that stay true to themselves. They find a good thing and tend it lovingly.

To my delight, the Beehive still sits at the same corner. Still has a lunch counter and still has smiling women who are nice to every customer. And the chicken-fried steak? Well, it was just as good as all those years ago. Fresh corn on the cob. Hand made smashed garlic potatoes.

After seeing all those big sites, visit Montesano some day to remember that local travel is always the best way to learn and share. 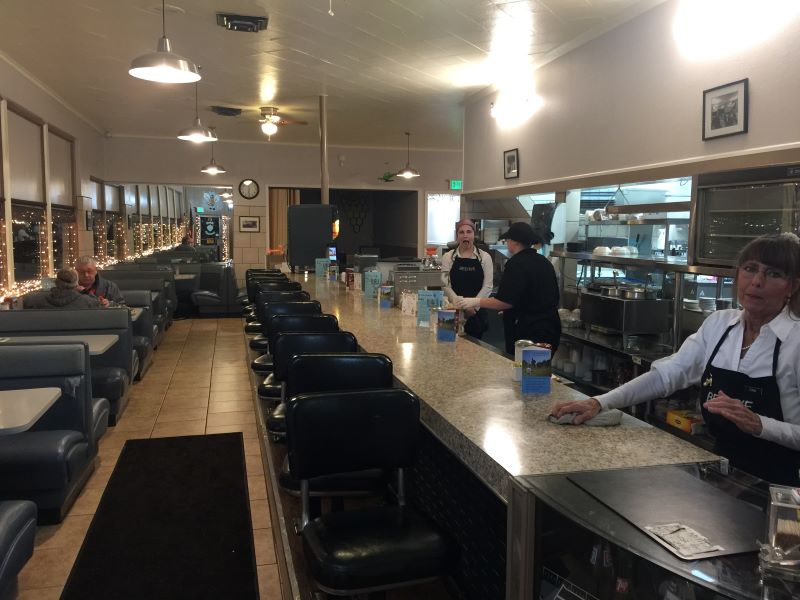 Clammers Rejoice! Christmas Present from Dept. of Fish and Wildlife The announcement came last Friday after Copalis passed two successive rounds of marine toxin testing. A final test late this week will finalize the decision. If the go-ahead comes, clamming will be allowed during the evening tide on December 24th, 25th, and 26th.

Recently, naturally accruing algae has produced marine toxins which make the consumption of Razor Clams unsafe. These toxins are still present in other ocean beaches, which resultantly, will not be open for clamming.

The recent Razor Clamming restriction is yet another chapter in this years continuing story of unsafe algae toxin levels. The 2015 algae bloom is the largest in over a decade, and has produced incredibly high levels of domoic acid. Shellfish can accumulate high concentrations of this acid during filter feeding. If ingested by humans, this neurotoxin can result in brain damage, and even death.

While that sounds bad, levels have been trending down lately, and so clammers are anxious to get back to the beaches and make up lost ground. Last year was a bumper season with almost 400,000 digger trips, and the harvest of almost 5.5 million clams according to the Department of Fish & Wildlife

If you’re crossing your fingers for some Razor Clam stocking suffers, make sure you know the main rules: each clammer may only take the first 15 clams their dig, and clammers older than 15 must have a 2015-2016 fishing license.

Today state shellfish managers announced, "Digging will remain closed on ocean beaches for the remainder of the razor clam season because of elevated toxin levels."

The result in cancellation of the two openings that were tentatively scheduled to start May 15 and May 22.

The culprit is domoic acid, a natural toxin produced by certain types of marine algae. This is bad stuff which can be harmful or even fatal if consumed in sufficient quantities. The Clams absorb the acid in their fat cells and can retain it even after the ocean is free of the stuff.

So if you dug any clams and froze, bottled or canned them it is now time to toss those critters in the trash and write it off to bad luck.

But there is good news. The phenomenon of domoic acid is nothing unusual. Clams have been going through this cycle forever. The waters will clear and razor clamming will resume again this autumn.

Until then we'll just have it switch over to greasy hamburgers and deep fried fish. Is it no wonder we all love Razors?

There are many activities to be experienced along the Washington coast. The landscape offers a different ecological landscape than what many of us see in Seattle and east. What excited me after a long warm summer spent hiking high in the mountains was receiving the tentative dates for Razor Clam digs!

Razor Clams are a meaty shellfish that can be found along the pacific coast from California up to Alaska. Harvesting Razor Clams and preparing them is an intrinsic characteristic of Washing coast culture. What makes this activity a great candidate for your fall explorations is that you only need 3 things; a clam shovel, a bucket to place them in, and your fishing license.

One thing to be noted is during the fall digging season low tides happen during the night meaning you must dig for your treasure under darkness. While the rising popularity and resurgence of Razor Clam populations has brought many newcomers to the sport, you might find the majority of people harvesting during spring when low tide appears during daylight. Feel like braving the night? Possibly braving the weather? It's likely you'll be rewarded with many opportunities and a less crowded beach! Check the Washington Department of Fish and Wildlife for updates.

Hope you see you out there.